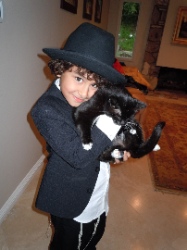 Instructions: "Write a biography of yourself, from the perspective of your biggest fan writing about you."

Biddy is my blind cat who died, and she’s writing to me from heaven:

My brother Noah is a good person (except for the fact that he wears regular clothes instead a beautiful fur coat). I was his adopted cat sister. I was born blind, and left him to go to cat heaven on September 4th, when I was 15 years old. But I’ll always remember him.
He loved to make faces when he fed me. I don’t think it was because my food smelled fishy, or anything like that. I think he made faces to make my mom Haya laugh.
He loved to play video games after his school work, in order to entertain me (even though he didn’t really look at me when he played his video games). I used to like to nuzzle right on his leg to get his attention when he was playing his games.
Unlike my mom, my brother Noah never got mad at me when I went poo in the fireplace.
He loved to let me go outside. We liked to rest together outside and listen to the birds chirp. We always wanted to catch a bird or lizard, but I couldn’t see and he couldn’t hide in the grass like me.
Noah always understood me, even when I hissed at him a million times with my stinky breath. No matter how many times I took off with his stuffed animals in my mouth, he always loved me.
Even though I was blind, I could imagine what he looked like. He sent me a message through his mind and showed me a picture of what he looked like:  Curly hair, brown eyes, big bulging muscles on his legs, and a face of pure beauty. That’s what the message told me.
When he was first born, he was crying all the time. I did not know what to make of him. I made sure to keep my distance from him! But then he started crawling, and I couldn’t get away from him. Luckily he pretty much left me alone, because there was another cat to play with in our family. His name was Picasso, but Noah called him Patso. Noah played mostly with Picasso, and Picasso could see Noah coming so he wasn’t scared like me. One day I asked Picasso, “How do you deal with this guy?” And Picasso said, “You just have to be his friend.  When he gets older I think you’ll like him a lot.” And I said, “Yeah right, when hedgehogs fly!”
Then, a few years later, my big brother Noah came up to me and started petting me gently. Suddenly in my imagination, I saw a hedgehog flying! And we became great friends.
He used to pet me a thousand times a day, and I loved when he would pet me. One day I sent him a letter on the computer. My adopted dad and mom were talking to each other through this computer thingamadoodle called Skype. So I meowed, meowed, meowed until my adopted dad put me on his lap. Then I hit the keyboard as many times as I could, until he put me down. I waited hopefully for Noah to respond.
This is what I wrote:
8-= b
""""""""""""""""""""""""" VCCCCCC
It means, “Biddy loves you to infinity”.  But then again, I was blind and I had paws instead of fingers, so I couldn’t type very well. So I hope he understood what I was trying to say.
If I could say something to him right now, it would be: “I love you and miss you Noah. Love Biddy.”