It is important to understand what the body does when death occurs.  Not in an attempt to be morbid, but so that you will not experience unpleasant surprises and so that you will be prepared to witness the passing of your pet.

In the process of a quiet, peaceful home euthanasia, it is unlikely that you will witness anything very upsetting or unsettling.  In about 95% of the cases, you will not see anything else than the cessation of breathing and of motion.  Body reactions can occur however, and in the event that you see something it is important for you to understand that these body reactions do not equate suffering and are part of the natural event of dying.

The genetic entity is geared towards survival.  Cells and bodies are reluctant to let go of life and when death occurs, the body may attempt to stay alive even though the spirit is leaving the body.  This is not an indication that your pet was not “ready” or anything of the sort.

The most surprising of those reactions is the “agonal breathing”.  This looks like sudden or convulsive “breaths” which do not actually lead to oxygenation.  They are more or less a reaction of the nerves in the body trying to “kick start” the body back into life again.  There can be only one "shudder" or several in a row (4 or 5 is common, more is rare, but I have seen one instance of a pet having over 20 agonal breaths.  In this particular case, I had plenty of time to verify that the heart was not beating anymore).  When those occur, there is not enough oxygen to the brain for the pet to be conscious.  Agonal breathing occurs as the body is dying and the pet has no consciousness of this and certainly does not feel like "he can't breathe".  Most of the times, those are silent, but occasionally, breathing noises can accompany them.  Some people describe it as a shudder or a grunt, I've also heared the term "death rattles", but the pet has no consciousness of this occurring.  They do not always occur.  As a matter of fact, they are unlikely to occur because we use a drug that calms the body and that helps to prevent agonal breathing.  In addition, injecting the euthanasia solution slowly also helps to prevent agonal breathing.  However, sometimes, despite the use of this drug and despite the slow injection of the euthanasia solution, agonal breathing cannot always be eliminated.  It is important to understand that agonal breathing does not mean that the pet is suffering and that pain is experienced.  Remember, if and when they do occur, the pet is already unconscious and chances are that the heart has already stopped.  For all intents and purposes, the pet is already gone.

Other reactions that can be seen are little twitches of the muscles or skin.  These can sometimes last for several minutes after the pet has passed away.  They are normal nerve reactions but do not always occur either.  They are very subtle and not always observed.  When observed, they are most often seen around the lower part of the shoulder or around the muzzle, but they can be seen anywhere on the body.

Occasionally, vocalization can occur as death takes place.  This is rare, but it can be very upsetting to a pet parent when this occurs as vocalization is often associated in our minds with pain.  This vocalization is involuntary and does not necessarily mean that the pet is experiencing pain.  Vocalization at the time of death can include moans, groans or rarely, a howl.  I have seen it most frequently associated with defecation (passing stools) and a curving of the spine and tail (extension).  Again, this is an involuntary reaction that sometimes occurs at the time of death. 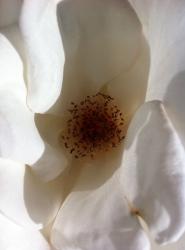 The normal relaxed position of the eyes after a pet (or a person) has passed away is open.  Eyes will likely remain open.  Rarely they close and sometimes they are in a sort of a neutral position, neither open or closed.  Pet owners often ask me to close their pet’s eyes.  Unfortunately, even if we close the eyes, they will inevitably re-open unless a little drop of surgical glue is put under the eyelids.  Some people find it particularly unsettling to see their pet’s eyes open and prefer that I use that little drop of surgical glue.  If this is the case for you, please do let me know.

In addition to the eyes remaining open, the cornea (the clear part of the eyes) will take on a glassy or blurry appearance within a few minutes.

Bodily fluids and gas will “leak” out.  If the bladder is very full, there will be a large puddle of urine under your pet, so it is important to prepare for this and to have towels readily available to slide under your pet after his passing.  Even if your pet has recently urinated, it is likely that there will be a little bit of urine leakage.  It is not as common for feces will leak out, but it can happen, especially if your pet has had diarrhea.  If your pet has been very ill with severe diarrhea or bloody stools, it can be quite messy after his passing.  Again, better be prepared.  Out of respect for your pet, we will never force your pet to lie down on something unusual that he may be uncomfortable with.  But if towels are nearby, as soon as your pet has passed away, we can slide those towels underneath him before leakage occurs.

Sometimes, particularly in cases of congestive heart failure, chest bleeding due to a ruptured tumor, pneumonia or trauma, blood tinted fluid can escape the nasal cavity or mouth.  This can look scary, but as your pet has already passed away, his suffering has ended and this will be of no consequence to him and is a normal part of such disease process.  If your pet’s illness did not involve the conditions named above, this nasal or oral bleeding will not occur.

Other normal occurences include the ears becoming pricked, the tail can curl up, the hair (hackles) along the spine (particularly at the base of the spine and on the tail) can become raised. Very rarely, the entire body can stretch during the death process or immediately after.

After the passing of your pet, when his body is moved or lifted, sometimes, the air empties out of the lungs and as this happens, you may hear something what sounds like a breath or a grunt.  This does not mean that your pet is still alive or is still breathing.  It is just the leftover air leaving the lungs.

With all the above said, you should not worry yourself unduly that the passing of your pet will be traumatic to you.  A home euthanasia is usually very peaceful and the reactions described above are benign and not very scary or traumatic to a pet owner.  Being aware of what can occur will find you prepared for all eventualities and will minimize the upset and trauma you will inevitably feel at the loss of your beloved pet.  The most important thing to remember is that your pet’s spirit left peacefully and the body reactions which can be considered potentially unsightly by more sensitive people are just body reactions and they do not indicate suffering upon euthanasia.  If you know that you are very sensitive and likely to be very upset in the unlikely event that you see any of these reactions, you may want to consider not being present for the final injection and may want to choose saying your final goodbyes beforehand.

Death occurring naturally, unaided by euthanasia is usually more dramatic to a greater or lesser degree.  Agonal breathing is likely to occur and may last for several seconds and even minutes.  Twitches are usually more evident.  If your pet is experiencing pain, he may vocalize.  The manifestations of death vary depending on the disease process causing death.