An Aid to Burying a pet 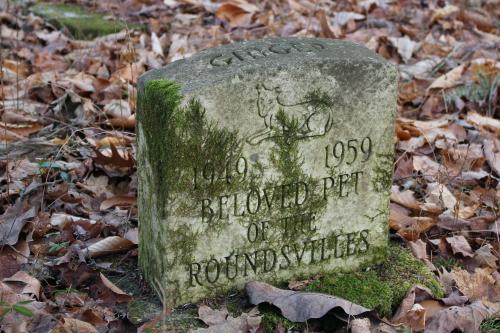 Burial of animal bodies is generally not permitted in urban and suburban areas.  In Southern California, each municipality has its own guidelines and rules regarding the burial of pets, so please be sure to contact your local municipality for details on whether or not this is permitted in the area  where you live and the specifications on depth and location of burial ground.
Burial should only be performed in accordance with local and state laws and with the landlord’s authorization.
There are no federal official guidelines for the proper disposal of dead animals.

It is important to understand that euthanized animal remains contain a deadly poison which could, if ingested by protected wildlife, not only cause the death of endangered species (and other species, including other dogs and cats) but the responsible parties are subjected to criminal prosecution under the Migratory Bird Treaty Act (MBTA), Bald and Golden Eagle Protection Act and the Endangered Species Act (ESA), to name a few.  Fines can include $100 000 per individual and up to a year of imprisonment.  So this is no light matter.  At least 133 bald and golden eagles have been documented to have been killed due to accidental ingestion of Pentobarbital residues from euthanized animals.

The following simple guidelines can avoid accidental contamination and catastrophies for wildlife, other pets and for human health:

When digging a hole, ensure that the top of the body is covered with at least 2 feet of earth. If this depth is not attainable, it is important to cover the hole with a large rock or wire to prevent digging by wildlife. Note that:
Euthanized pet remains are poisonous and possibly mortal to other animals who would ingest it.  The residues remain in the carcasses for a long time after death.
Pets that died of a contagious disease should be cremated.
A deceased animal may leak body fluids after passing.
Buried animals must not come in contact with any surface bodies of water or groundwater including inland lakes, streams, rivers and open drains.
Deceased animals should not be buried in sandy soils, black land, rocky soil, flood land or around home foundation.
Animal graves must not be located within 200 feet of any stream or groundwater and 500 feet from a well used to supply potable drinking water
Place a layer of lime at the bottom of the hole and on the body.

Compress the earth and level the soil.

Take a moment to yourself…

Finally, if you ever sell your property, it is important to notify the future buyers of the presence of any animals that may be buried on the land.

Please accept our most heartfelt sympathies for your loss…
our thoughts are with you and your family during this difficult time.